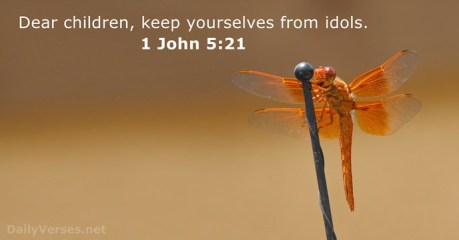 Proverbs in the Bible says the beginning of wisdom is the fear of the Lord. Jesus in the New Testament say He is the truth. If these statements are true claims of a deity (and they are quite true) then that tells us that there is a true God and so false gods must exist.

This is the time that Christians celebrate the birth of Jesus who decided to pitch His tent among us for 33 years and then redeem us.

Since we rejected God in the Sixties our culture has become primarily that of false gods. Sometimes false gods are easy to see. The opioid crisis is an easy one to observe. People, because of one type of pain or another give themselves over to the opioid as a way of escape, or a transition from a milder drug, or as a way to deaden the pain. It is God’s desire to deliver people from such destructive devices. But the drug becomes a false god that demands everything. The results are tragic.

But the bigger picture is that our hearts are designed for worship. If that is too strong of a statement for some of you then let’s say that our hearts gravitate towards something that we put a good deal of time and energy towards.

The technical and Biblical definition of an idol is anything we put ahead of God, even if it is a good thing. The very first commandment says, “…You shall have no other gods before Me.” Just about everyone violates this commandment including Christians and it causes us a boatload of grief.

Liberals put self, government, sex and just about everything under the sun ahead of God. Republicans put power, position, a cheap and illegal workforce, and donations from Chamber of Commerce companies ahead of all other concerns including God. Often times pastors have congregation size and income as idols. Christians construct prosperity or morality as idols. The media have their share:  power, ratings, the desire to control the narrative and liberalism in general.

These concepts are beyond important in understanding life. God has two claims on our existence. First is that He created us. Second is that Christ is a ransom. So when we reject these truths or in ignorance let something besides God Himself consume our energy and time, in other words occupy the affections of our heart then we go astray even if it is very subtle or hidden.

Timothy Keller explainsthis so well. Lets say that you say a white lie to save yourself from being embarrassed about something. Well, the obvious close up idol is that you lied in violation of God’s commands, but the far-off idol is that your desire to please people or make yourself look good which caused you to commit the sin. I know this sounds like gibberish to some people but that is because our culture so indoctrinated with moral relativism and delusions rather than God’s revelation to us.

Race can be an idol, as in the cases of Hitler, skinheads and Jesse Jackson – a sad thing considering all of us are made in God’s image.

Pelosi and Biden call themselves Catholics. But since they both support abortion their real and functional god is liberalism.

A fascinating point about idols, false gods, is that they can be deadly. Examples are suicide bombers, unabated alcoholism, immorality that results in AIDS, and many other things that when practiced lead to an early demise.

But many other idols are far more deceptive and hidden.

If at this point your skepticism is sky high, then consider G. K. Chesterton’s comment, “The riddles of God are more satisfying than the solutions of man.”

The big picture here is that our hearts are captured by the living God and the beauty of what Christ did to redeem us or our hearts are captured by something far less worthy. And since idols will always disappoint us because they are something infinitely less than the real God of the Bible, this might very well be the season to evaluate whether we have allowed these false gods to capture our hearts or if the Reason for the Season has a legitimate claim on our life.

Your Choice: Truth or Carnage

A culture war has raged on since the 196o’s. One side says liberalism is the correct direction. The other side says God is alive and well and we celebrate the birth of His Son this season.

Nietzsche said there is no God. The last liberal Democratic Convention agreed. The natural outflow of this is Communism which has led to the death of 94 million people to enforce it.

Atheists rabidly pound on the delete key regarding all things related to Christmas but the carnage exposes the lie.

The Bible is a collection of 66 books written by 40 authors over the span of about 2000 years all pointing to one single outrageous event – the birth, death and resurrection of Christ. Jesus appeared to over 500 people after His resurrection.

In the movie Gladiator, Maximus says this, “What we do in life echoes in eternity.”

To those of you who absolutely refuse to recognize the truth carnage awaits you.

To those of you who recognize that Jesus is the way, the life and the truth, Merry Christmas to you and your loved ones.