If the media was not so deluded because they reject God and obsessed with attacking Trump then they would run Op-Ed pieces like this. 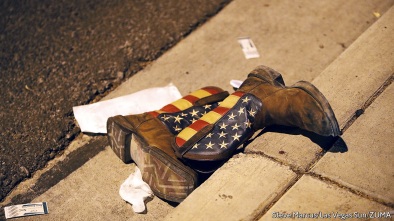 God wagers a great risk when He creates each and every human being. God refuses to violate our free will so the risk is that we will do significant evil instead of good. He also risks the fact that someone He created will never acknowledge His creating them nor the bridge that His Son provides.

And so we get both ends of the spectrum. A person like Mother Theresa chooses great good. And unfortunately a man chooses evil and the Las Vegas massacre happens.

Sin is a matter of violating the design and intentions of our Creator. God did not design one human being to take the life of other human beings in a wanton and malicious manner.

The Las Vegas massacre is a very nuanced matter. There are many factors to consider.

But in the mix is this axiom to behold, “Blessed is the nation whose God is the LORD,” which is a verse in Psalms in the Bible. And since these mass murders and terrorist attacks keep plaguing our country then that should give us great pause to consider why. It is false to say God would cause something like the Las Vegas massacre. But there is this dictum of God removing His hand of protection from a nation that has turned their back on Him. There is this deception and fatal consequence for a groupthink that supposes man can depend on his own righteousness, merit and self-sufficiency.

There is also this principle in the Bible, “yet he does not leave the guilty unpunished; he punishes the children for the sin of the parents to the third and fourth generation.” So if Stephen Paddock’s father chose the evil of robbing banks, broke out of prison, was on the FBI’s Most Wanted list and had the diagnosis of psychopath, then we have a perfect and catastrophic storm brewing unless there is some sort of intervention.

Las Vegas and its surroundings are not known for producing specimens in right standing with God. So Las Vegas nurtures the son of a psychopath with the vices of gambling, “escorts” also known as prostitutes and alcohol. This elixir can produce nothing but evil.

As obnoxious and messy as they are, politics do matter, which is why we Christians keep proclaiming annoying but vital truths such as Second Chronicles 7:14, “If my people, who are called by my name, will humble themselves and pray and seek my face and turn from their wicked ways, then I will hear from heaven, and I will forgive their sin and will heal their land.”

I am not saying Republicans have answers – they do not. I am saying God does. And modern liberalism is nothing but a strong delusion. Give no regard to the myopic subterfuge called “the separation of church and state” which is not in the Constitution. If you want answers that matter about the tragedy Las Vegas then ask the God of the Bible who gives wisdom to those who seek Him with all of their heart.

6 thoughts on “Answers When There Are No Answers: Las Vegas Massacre”