King Solomon wrote three books of the Bible. In Ecclesiastes he said there is a time to love and a time to hate. 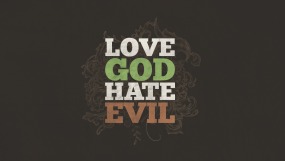 Paul in the Bible said we should hate what is evil and cling to what is good.

The New York Times estimates drug overdoses in America in 2016 were around 59,000. We have an opioid epidemic. The LA Times says this, “Last year, there were 20,792 homicides in Mexico — a 22% increase over 2015, and a 35% jump over 2014.”. These homicides are primarily drug cartel related. We need a wall for the health of both countries. Liberals hate the idea of a wall because illegal immigrants provide a dependent voting bloc. Republicans have zero courage. That is something to hate.

Now every June immoral men have parades taking “pride” in their evil behavior with even a President signing off on the wickedness. Obama in effect said sodomy is good – defying the very God who created him. Why is a good part of the world so enamored with homosexuality? Surely delusions run rampant on this earth. Homosexuals operate as if equality is the only worthwhile principle under the sun. Good men will hate such confusion.

Trump is hard to defend but he says he wants to make America great again. A good part of America would really like to see that happen. But the media and liberal democrats continually attack Trump with false narratives in an effort to derail his presidency out of sheer vengeance. Such an evil agenda must be hated.

The God of the Bible is the one who created you and all that you can see and behold. But this liberal nonsense of, “separation of church and state” that is not even in the constitution has been used by deceived men to drive God out of our society. That is a scheme of evil itself

Hillary committed a crime using her own email server and then lied to you about it. She also gave the Russians 20% of our plutonium for hefty donations to her foundation. There is plenty of evidence that the Clintons used Foundation funds for personal gain. Bill Clinton is an alleged serial sexual predator of which Hillary is an enabler. This low brow character is the person Democrats and the liberal media think would be a good president for you. Such delusions are easy to hate.

Any philosophy like liberalism that demands that Americans be snuffed out in the womb is surely the dung beetle of world philosophies. Fifty-Nine million dead Americans from abortion as a result of “sexual freedom” is incredible human carnage. Anyone who does not hate such slaughter has a leanness of soul.

While the liberal media and liberal democrats cook up false accusations regarding Trump, Obama gave billions of dollars to terrorist Iran, he used the IRS to attack political opponents, he used the DOJ to deflect responsibility regarding the fast and furious, and he used AG Loretta Lynch to get Hillary off of the hook. Add to all of that lying about Benghazi and having subordinates lie about a dead American ambassador all of which the liberal media gave Obama a complete pass on and the hate piles up like dead stinking rats.

Two caveats are in order for liberals. First is that we are to hate evil but not people. Second is that the typical liberal response is that we should not judge. Well, that is one verse in the Bible that paints a picture. Jesus also said we should judge with a right judgment and the need for discernment is thoroughly documented in the Bible.

There is plenty to be grateful about our country – the greatest civilization in the history of the world. First our great heritage is second only to God’s great providence in ancient Israel. Second, there are a whole lot of great people in our country who understand good from evil. Third, our appeals to our Creator do not fall on deaf ears.

If we continue on this foolish liberal path that says we are “evolving” beyond religion and our Creator then our decline will continue.

Jesus said He is the truth. This Fourth let us hate what is evil and embrace what is true.